I had the strangest dream a few nights ago, but only just had the chance to share it with all of you.

In the dream, I was sitting down a moonlit beach ... one that looked very much like the image below. The only difference was that there was a steep slope from the sand to the waves, and the waves thrashed against it. Other than that, I was wearing a white dress, and though it was dark and I was alone, I was unafraid.

As I dug in the sand, I prayed, asking God whether or not everything would be okay. Seemingly in answer I pulled a white, glowing stone - a piece of the moon - out of the sand. It lit up my palm and, smiling, I stood up and let it fall from my hand.

I began looking for seashells. The first was a small scallop with gold inlayed in its edge; the second was dark blue and smaller. But as I looked for the third, I slipped on the sand and fell down its slope into the waves. I immediately sank, and even though I swam and clawed my way back to the surface, I couldn't make my way back to the shore. It was then, and only then, I was afraid.

I woke up right then. 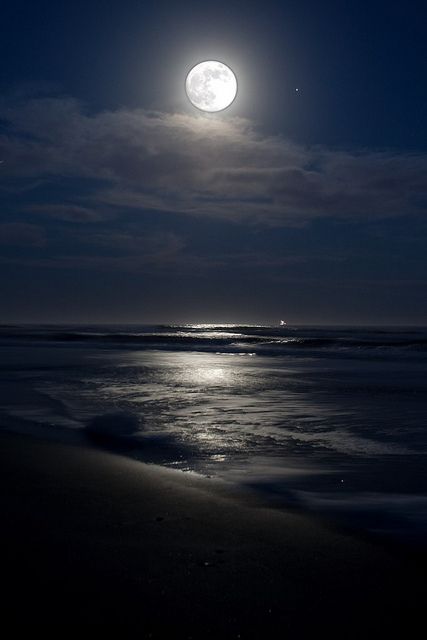 You need to be a member of SeventhsightNew to add comments!

This reply was deleted.
Scroll